Feature Story: Goodbye, to the Vaquita?

In May 2020, the International Whaling Commision (IWC) released the latest acoustic monitoring data. It is estimated that in 2019 there were only 10 vaquita porpoises left in the world. The vaquita, will likely become the second cetacean species to go extinct due to human activities, suffering the same fate as the Baiji river dolphin in the Yangtze River.

The Origin of the Matter: the Valuable Fish Maw

Hong Kongers are no strangers to fish maw. It is often seen on the dining table during a banquet or holiday dinner, but few would know that our pursuit of the precious fish maw have severely impacted the lives of a cetacean species on the other side of the world, to the extent of extinction.

Fish maw is derived from the swim bladder in the fish’s body, which is responsible for controlling buoyancy of fish. Despite the lack of scientific evidence, Chinese society generally believes that fish maw has the effect of nourishing “yin” beauty and strengthening body functions. It is believed that consuming fish maw aids in repairing the body and giving a youthful complexion. Therefore, fish maw is commonly found in Chinese cuisines and traditional Chinese medicines. Depending on the species of fish, fish maw prices range from moderate to expensive, with the Chinese Bahaba fish maw being one of the most expensive. The Chinese Bahaba, also known as the giant yellow croaker, is found living in near-shore estuarine waters ranging from the outlet of the Yangtze River in the north all the way to the Pearl River Estuary on the West side of Hong Kong. Unfortunately, in recent years, local fishermen have pushed the Chinese Bahaba to the brink of extinction due to overfishing. Due to its rarity, the price of the Chinese Bahaba’s fish maw has been skyrocketed to over HK$10,000 per catty. Moreover, wealthy people regard the plump size and attractive yellow colour of the Chinese Bahaba’s maw as treasures to highlight the affluence of a family. With the Chinese Bahaba becomes increasely scarce, fish maw traders hope to find a substitute. The Totoaba that lives in the Gulf of California, Mexico, is a suitable candidate as its swim bladder shares a similar resemblance to that of the Chinese Bahaba.

As early as in the 1970s, fishermen in Mexico have been catching the Totoaba commercially, and their population numbers have since fallen sharply. In 1975, the species was listed as Critically Endangered by the IUCN Red List of Threatened Species. Recent demand for Totoaba swim bladders as an alternative to that of Chinese Bahaba have only further fueled the desire for Totoaba.

“Few would know that our pursuit of the precious fish maw have severely impacted the lives of a cetacean species on the other side of the world, to the extent of extinction.”

The Vaquita – a Victim to Fishing Nets

In 1958, the vaquita was officially described by scientists as a new species of porpoise. There are currently only seven species of porpoises in the world, and the vaquita is the smallest among them. The adult vaquita is about 1.5 meters long and weighs about 54 kilograms. Like all other porpoises, they have no obvious beak. They are completely grey in colour with darker colouration around their eyes and mouths.

You may ask, what is the relationship between the Totoaba and the vaquita? Both species are similar in size and both inhabit the northern waters of the Gulf of California. When fishermen deployed gillnets to catch the Totoaba, vaquitas often got entangled as bycatch. Vaquitas, being timid in nature, would panic and struggle after coming in contact with gillnets which would only further entangle them. The ensuing panic will result in vaquitas dying from drowning or of fright. Due to the extremely narrow range of distribution and its overlap with the main fishing area of Totoaba, the threat of entanglement has proven to be catastrophic to the survival of vaquitas. 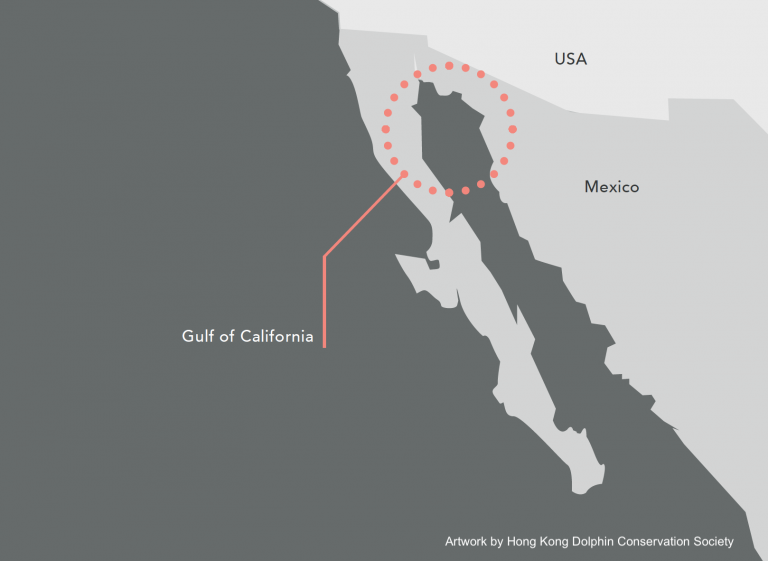 “The number of gillnets in the Bay never reduces. Vaquitas continue to be found dead in gillnets from time to time.”

The vaquita population has fallen sharply in recent years, from about 600 in 1996 to only 10 in 2019. The entire population has almost vanished in about two decades. After conducting studies to determine if other environmental factors were responsible for the vaquita’s decline, scientists confirmed that entanglement in fishing nets was possibly the only cause. In 2015, the Mexican government announced the implementation of a two-year gillnet ban in the Gulf of California. In 2017, gillnet fishing was permanently banned in the Gulf of California. However, in the face of huge profits, many fishermen still carried on using gillnets illegally. Local government and law enforcement officials turned a blind eye to the illegal fishing due to corruption, resulting in the number of gillnets in the Bay never reducing. Vaquitas continue to be found dead in gillnets from time to time. 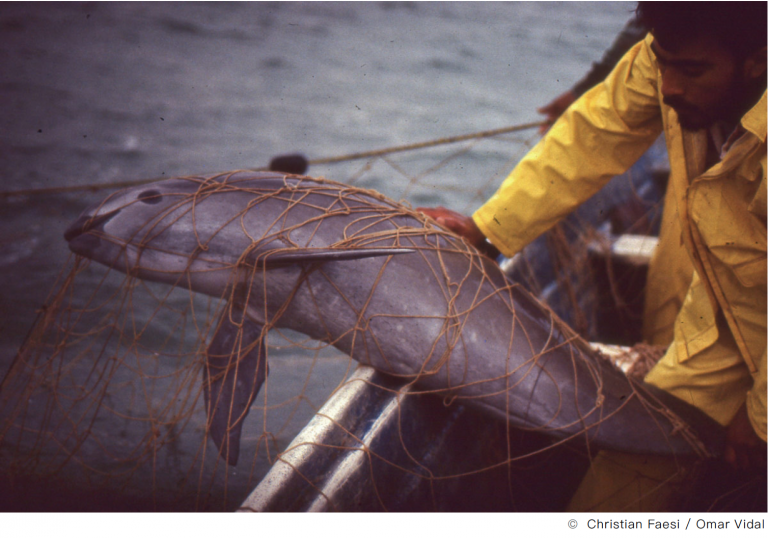 Time Is Counting Down

Seeing that the number of vaquitas has decreased to near extinction, scientists in 2018 tried as a last resort to save this endangered species. A project to capture the remaining wild vaquitas and breed them in captive environment was attempted. Unfortunately, in both of the attempts of capturing, the wild vaquitas were extremely stressed and cannot adapted to captive environment. 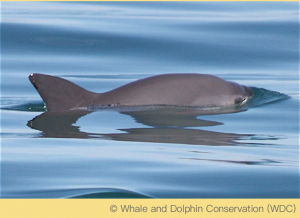 The first individual captured was a female calf that appeared together with her mother. After being placed in a captive holding facility and then a sea pen, the calf could not swim normally and seemed extremely stressed. Scientists soon determined that the calf had pulmonary edema and decided to put her back in the ocean as soon as possible. However, the calf’s chances of survival after being released was uncertain as it was already separated from her mother for an extended period of time. The second vaquita caught was an adult female. Although the condition of this individual was initially better than that of the calf captured before, the health of this adult female deteriorated rapidly while she was housed in a sea pen. Unfortunately, the adult female had difficulty in breathing and eventually suffered from heart failure before scientists were able to return her to the sea. The scientists responsible for the project then announced the suspension of the operation. 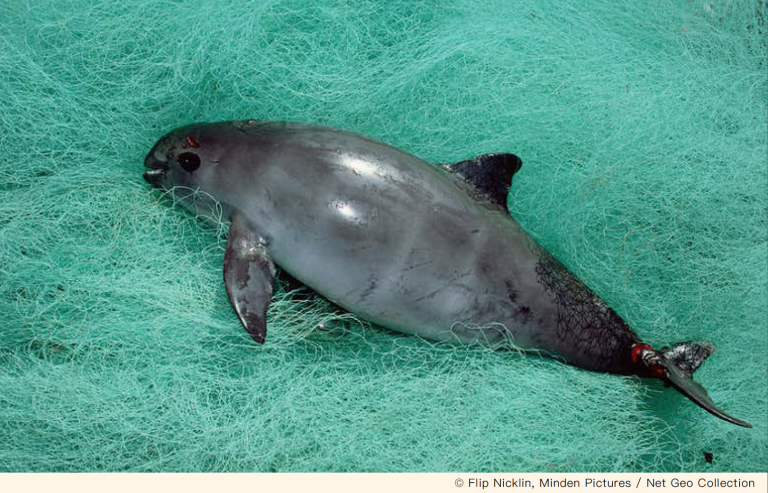 After two unsuccessful “rescue” operations, the only viable option now is for fishermen to cooperate with conservation efforts to retrieve all gillnets in the Gulf of California, so that the vaquita population can have a chance to recover. However, in 2019, news have reported that vaquitas were still being entangled by fishing nets. This suggested that law enforcement has not been able to effectively prevent these tragic incidents from happening. If vaquitas continues to be entangled by gillnets, they will likely go extinct within two years.

What can you do?

How to Learn from these Painful Lessons

Scientists, governments, and conservation groups have been struggling to find ways to conserve the vaquita, despite continual efforts. In addition, there are other whale and dolphin species that are also approaching critically low numbers similar to the vaquita. There are approximately 60 remaining Taiwanese humpback dolphins, the subspecies of the Indian-Pacific humpback dolphin in the Taiwan Strait. The construction of offshore wind farms may only worsen their already critical situation. In New Zealand, a population of about 60 Maui’s dolphins (a subspecies of Hector’s dolphin), continues to suffer from fishing net entanglement. Furthermore, studies have shown that Toxoplasmosis, a parasitic disease found in cats and humans, is a cause of death for Maui’s and Hector’s dolphins, further threatening the Maui’s dolphins. Lastly, the number of North Atlantic right whale has plummeted since the commercial whaling era. Even though the IWC has implemented a whaling ban in 1986, the species continues to get entangled in fishing nets. A 2015 study has shown that there are only about 458 North Atlantic right whales left in the world, and the numbers are likely to decline.

While the extinction of the vaquita seems to be inevitable, we must learn from our mistakes and review what went wrong during the case of conserving the vaquita. We must rethink the way we treat the ocean and natural environment. There is no doubt that environmental issues will only be increasingly severe as time goes by. The prevention of species extinction and ecosystem collapse is a challenging issue we can no longer ignore. 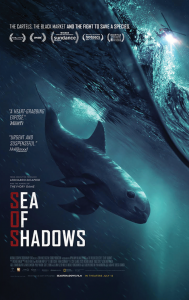 The short-film tells about the ongoing challenges faced by members of the local community, journalists, NGOs and scientists as they try to ensure the future survival of vaquitas in the Gulf of California. In the face of government corruption, continual illegal fishing by fishermen, and illegal fish maw trade, will there be a chance to reverse the grim-fate of the vaquita?