The official “30 Third Runway Victims” campaign was a great success! We received tons and comment and support. Hopefully our efforts have not been in vain. I feel so happy to have contributed to such a great cause and worked with such a wonderful team of people!

Now that the campaign and book fair has ended, we are finally back to a more normal schedule of surveys. Today was my first day at “Sham Wat” for a land based survey. All the interns have been except for me and everyone was telling me how horrible the hike and the place is. Because of all this I really thought it was be awful, but it wasn’t as bad as I predicted it to be. I’m not saying that it is an ideal place as it is still pretty exhausting; it was a hot and I did get sun burnt.

The hike wasn’t too long and I can proudly say I managed to carry the tripod there and back! We also some cool spiders on the way. In fact, on the way back, Vincent spotted a spider that was shedding?! This was the first time any of us and seen or heard of spiders that need to shed. Vincent was kind enough to let me use his photo. Have a look! 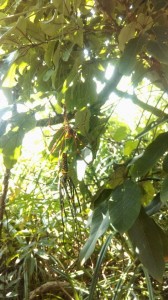