Browse: Home   /   My Time With the Chinese White Dolphins 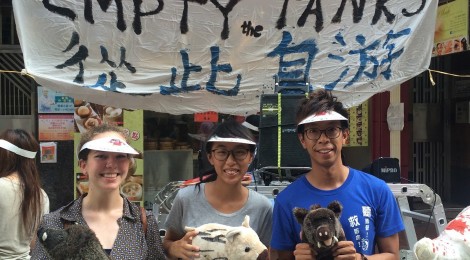 My Time With the Chinese White Dolphins

HKDCS / August 15, 2015 / Comments Off on My Time With the Chinese White Dolphins / Samantha Klein
Share on

During these past two months working for the Hong Kong Dolphin Conservation Society I nearly got a heat stroke, been sunburned more times then I can count, and gained weeks worth of valuable research experience. Being able to watch finless porpoises and Chinese white dolphins in their natural habitat made every difficult day worth it. The creativity and curiosity of the dolphins consistently amazed me. Their socializing behavior was the most interesting behavior to watch. During the times when a group of dolphins would come close to our boat we could see them breaching on top of one another, play fighting and swimming close together. These moments were truly heartwarming because even though this dolphin population is facing so many threats they still socialize together in the presence of our research group.

Before beginning this internship I knew that the work would be physically demanding and at times it was. However, I have learned that to get accurate data while doing fieldwork it requires patience. There were some days during boat and land surveys that we had zero sightings. It was on these days that my focus faltered, but it was inspiring to see the HKDCS staff members continuing to stay focused even during our most tedious surveys. While doing boat surveys I learned how to do the line transect method to estimate the dolphin population of a given area. I also helped do off-effort searching for dolphins and porpoises using binoculars to scan the area. On days when we went to Tai O we collaborated with interns from the World Wildlife Fund. Our task was to record dolphin dive time and the interactions between dolphins and dolphin watching tourist boats. With this information we could determine whether the tourist boats were disturbing or endangering the dolphins. At first I thought that this was too much for me to keep track of at one time. I was worried that the data we collected would not be accurate. But after a few weeks of doing this survey I learned how to record dolphin behavior and the boat behaviors at the same time. Hilary, Zabrina and I made a good team. 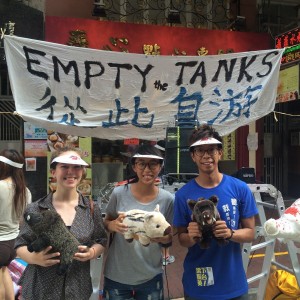 I did not expect this internship to take such a large emotional toll on me. The reality of the situation is that the cetacean populations are struggling in Hong Kong waters. The goal of our organization is to collect accurate information about marine mammal distribution in Hong Kong. Additionally, we want to educate the general public and the government about the state of the dolphin and porpoise populations. Due to the HKDCS ‘s thorough collection of data over the past couple decades it can be seen that the dolphin population decline is a direct response to human caused threats. The greatest of these threats being habitat destruction. This includes land reclamation for the airport and increased boat traffic around Lantau due to the construction of the Hong Kong Zhu Hai Macau Bridge. Hong Kong naturally has an amazing amount of biodiversity. Therefore, it saddens me to see these species being overlooked by the Hong Kong government in favor of new developments. 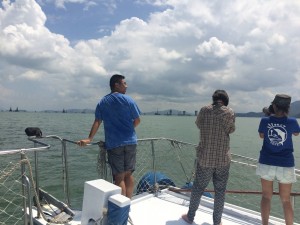 During my third week of the internship two dolphins passed away. One of these cases was a young calf. This is a fairly common occurrence. The staff members were telling me that the mother kept pushing the small calf body underwater as if to protect it from our research boat. Then Leon showed me a video of this behavior. These dolphin calves commonly die from pollution and toxins that bioaccumulate in the mother’s milk. This happens due to the high levels of industrial pollution in the pearl river delta. It really hit me hard. In addition to this news, a dead adult dolphin had also been found that week. It made me feel very discouraged to hear about this poor baby dying as well. I know my colleagues are used to dealing with these dolphin deaths, especially the deaths of young calves. I admire them so much for continuing to do this work even though the survival of this dolphin population seems very uncertain.

These deaths made me worry about the population numbers since the death rate seems to exceed the birth and survival rate of the baby dolphins. The dolphin population has now fallen to about 60 and the porpoise population is estimated to be around 100. This experience also made me feel very emotional about the individual dolphins. I couldn’t stop thinking about this dolphin mother desperately trying to revive and protect her calf that died from causes that she could not comprehend. These innocent creatures are trying to survive in their natural habitat and human activities carelessly harm them everyday. After seeing them so active and lively when they play with each other all I want is for them to continue to exist in Hong Kong waters. It makes me very angry that the Hong Kong government keeps allowing unnecessary construction projects to endanger this special dolphin population. It all made me feel so powerless to work within our current system where the regulating body is so influenced by corporate interest and the Chinese government. However, it was the unwavering passion of the staff members at the HKDCS that pushed me forward and motivated me to keep working. Samuel, Taison, Viena, Leon and Vincent are so dedicated to this important work. The other intern, Hilary, and I had so much fun learning from the research team this summer. They made us feel like part of their family. While attending protests with the team and listening to them passionately talk about the plight of dolphins in captivity I grew to see that there are so many people working to save wildlife in Hong Kong. Furthermore, we met other activists who are working to end the slaughter of dolphins in Japan and other places in Asia. Additionally, learning about other endangered marine mammals such as the Vaquita has inspired me to pursue marine mammal research and conservation as I continue my studies. This internship was extremely fulfilling. I would not have wanted to spend my summer any other way.
-Samantha Klein 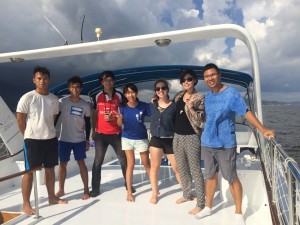