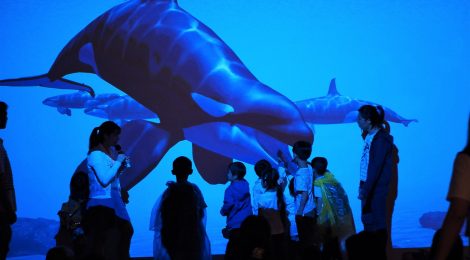 Hi guys, I am Rainbow Leung

I am Rainbow Leung, research intern at HKDCS. A little bit about myself. I did my tertiary studies in Australia, focusing on environmental studies and conservation biology. I always have a special attachment to the ocean. I used to play near the ocean and my grams’ fish farm when I was a kid. And Chinese White Dolphin is the first fauna I’ve ever seen since I have memories. That’s the reason why I started my internship at HKDCS to know more about marine conservation in Hong Kong.

Challenge the idea of anti-captivity???

I have asked a bunch of questions and try to get things more clear for me.

“Is that freeing the dolphins from the aquarium will actually offer them better welfare?”

Freeing the dolphin back to the wild requires a long process and have to overcome a few hurdles. i.e finding the suitable release area to allow them to gradually get used to the natural environment. So I guess return the captive animal back to the ocean is not always an option. Viena mentioned that some of the cetaceans from the Chinese aquarium have released in the European water. So freeing the dolphin is only part of the anti-captivity game plan. To protect the welfare of captive animal, we have to first start with prevention.

“Rather than freeing the dolphins from the aquarium, is there any other means to ensure/improve their welfare?”

I guess one of the most obvious answers would stop breeding them in the future. Also, apply regulation on the captive density, work hours, maximum capacity and other aspects. However, I doubted that those regulations will actually protect them as huge monitoring effort are required. From a cost-effectiveness perspective, I think educating the general public will be the best option. During the internship, I have followed Nadia to conduct couples interviews on how the general public thinks about the captivity issue at Ocean Park. Spoiler alert- we found that interviewees in the “under 12” age group have higher preference on keeping the dolphin performance. To tackle this issue from its source, we should balance the information they received by telling them the truth i.e. how dolphins suffer in the captive environment. Another idea I have is to develop a certification scheme for dolphin-friendly aquarium. This might encourage them to take cetaceans’ welfare into account. Also, adopt the new technology- Virtual Reality might hopefully facilitate better interaction between cetaceans and human beings without harming them (Photo 1). 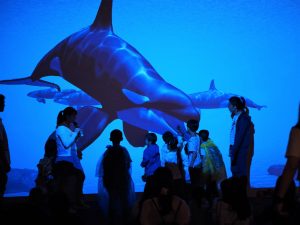 “But some of the aquariums claimed that they are doing good by rescuing the dolphin. Given that we have severely polluted the ocean, will put them in captivity an option to save them?”

This is the question my friend asked me when I try to tell her how critical the situation is. It really gets me to think. However, there are countless issues around captivity i.e. inbreeding which lead to genetic disease transmission. Also, Viena told me that the aquariums will exchange the genetic materials for breeding. So even they said all the dolphins are rescued, it doesn’t necessarily mean that their offspring are the same. I doubted that they have a better environment in captivity as many literature have suggested that captive cetaceans are under enormous stress and present with strange behaviours. This makes me reflect on the documentary “breathing room”. We think what we are doing is rescuing them i.e. provide treatment. But is that actually what the cetacean want? There is one dolphin has seriously injured by the boat engine. Luckily, it has demonstrated a sign of recovery. However, the government try to “rescue” the poor dolphin and later the dolphin was stranded. I was moved when I watch the clip. I feel like what people are trying to do right now is to “fix” what they did rather than stop doing bad to the environment.

To conclude, I still believe Anti-captivity is the way to go. Given that improving their welfare and freeing them might not always be possible, we should end the breeding of captive animals and keep the “rescued” animals in the aquarium. Yes, it is a long journey but we can now start with some easy moves.

My professor once told me, “There are always extremists in the society. They never get what they want. But because of them, we ended up with the intermediate solution.” Interning at HKDCS, I have heard so many stories that how we are fighting for the marine park and policy-wise measures. Working in environmental NGO, should we be the extremists on the spectrum to ensure the marine mammals have a fairly better treatment. Or should we be realistic and propose some workable measures to the government? When I say workable, I mean to consider all the conflicts that might occur especially from the fishermen side. As conservationists, we should not only focus on science but also the interaction with humans. I don’t have any answers right now tho. I hope I can find out throughout the journey. Maybe in the next post. Stay tuned!

Another question I got is how to argue the best for cetacean if the government only concerns about development. Chating to Vincent and Viena, the process can be separated into different stages from planning to post-construction phase. In Hong Kong, most of the time they adopt “development first, then conservation” framework. For the third runway project, the authority has established 2 marine parks which aims to mitigate the impact. However, the location of the marine park is right near the project area which likely to affected by the edge effect. Also, none of the areas overlapped with the core zone utilised by the Chinese White Dolphins. This is completely opposite to what I have learnt in terms of systematic conservation planning. The situation in Hong Kong has really striked me as there is none concern or priority have been placed on environmental protection. Not even with the presence of environmental impact assessment. I will talk more about it more in the next blog.

Internationally, threatened species will be assessed and placed with associated status on the IUCN list. In 2017, the status of Sousa chinenese has recategorised to vulnerable. This sounds really great, right? Tho nothing has changed. There is no extra concern or resource reallocated on Chinese White Dolphin. The current conservation policies are code of conduct for dolphin-watching, ‘paper’ marine park, ongoing monitoring. While the development projects are still increasing in number and expanding. Despite the discouraging circumstances, I still believe we have so much can do to save wildlife in Hong Kong.

← Hello again dolphin lovers!
Is EIA Process a curse or blessing to the environment in Hong Kong? →