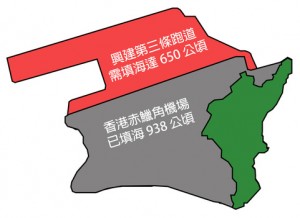 The acoustic survey results from the EIA report revealed that the proposed footprint of 3RS can potentially be important dolphin habitat at night, with the conclusion that it may be used more often at night with potential greater importance

As dolphins will almost certainly be displaced from the works area as well as North Lantau waters during the construction phase, the project proponent should provide critical information or predictions on where the dolphins may vacate to during the seven-year construction works period according to the TM requirement